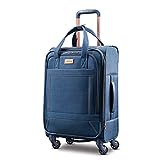 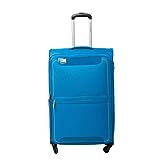 American Tourister and VIP have been going head-to-head over the past couple of decades as popular luggage brands. They both have had their fair share of ups and downs in the industry, oftentimes competing against each other. We have created this American Tourister vs VIP comparison so that you can get a better idea of what is going on with these brands and how they stack up against each other.

The Competition Between American Tourister and VIP

VIP is an Indian luggage brand that has been around for at least 40 years. They had 70% of the Indian luggage market in the late 90s and early 2000’s. Since then, they have come down to 50%. And a part of this reason is that they are competing against more international brands like Samsonite.

Samsonite is the parent company of American Tourister, which is part of their mid level range luggage models. They are generally more expensive than the VIP luggage, and offer roughly the same quality. One of the reasons why VIP has been hitting a slump is that it is being seen as outdated, particularly by younger consumers.

One of the reasons for this is the fact that customer demand for hardshell luggage has definitely been down in recent years. And the problem is that traditionally, VIP’s forte was in hardshell luggage.

In response to this, VIP released their Skybags line.

Skybags backpacks and luggage pieces came in a variety of styles and colours. You can definitely tell by looking at Skybags products that VIP has made much progress and in creating hip and young looking products. The Skybags line came out in the 80s, but not enough was invested in this line. In effect, they lost some of their popularity.

Sometime after the late 90s, VIP began to lose their market share to Samsonite. It was at this point that Samsonite had launched American Tourister in order to compete against VIP. At this time, the profitability of VIP fell to the single digits.

A 36 year old Harvard Business graduate, Radhika Piramal, was brought in to enhance the VIP offering. The goal was to offer a more variety and appeal to today’s generation of younger people. The Skybags brand was relaunched in 2012, which had most of their appeal in the youth. Unfortunately, VIP had already lost a lot of steam against Samsonite.

Fortunately for VIP, they have begun offering the Carlton line as a premium option that is aimed at professionals who prefer international brands. The Carlton line has been growing by 30% every year. A part of their strategy is to only offer Carlton luggage at exclusive stores.

Another initiative on the part of VIP is to offer handbags. This is due to the fact that the luggage market is not growing very rapidly, which means that they need to diversify. One of VIP’s handbag initiatives is the Caprese. It is the hope of VIP to double the company’s turnover in the next five years. In the meantime, Samsonite has decided to move into the specialized luggage market segment.

Only time will tell what will happen to these brands in the future.

Generally speaking, Samsonite is seen as being the more high-end brand compared to VIP luggage. This is likely due to the fact that they offer their luggage pieces at a slightly higher price than VIP. However, their American Tourister line is a mid range product line that is not come at as high of a price tag as their professional traveller luggage.

Where To Buy American Tourister And VIP Luggage

Upon doing some research, we have found that Amazon.com does not sell VIP luggage (at least as far as we have seen). However, Amazon.in sells them here on Amazon. But if you live in America, this may be expensive on shipping. You can also find VIP lugagge at Vipbags.com. But if you’re more interested in American Tourister, please the the following link: See the American Tourister luggage line on Amazon.

While VIP has made much headway in terms of making their brand more modern, they have mostly made their changes in the handbag industry. Comparing the look of their standard luggage pieces to American Tourister luggage, we feel that American Tourister is superior when it comes to attractiveness and style. This is, of course, our subjective opinion and is not based on customer reviews.

While pricing is very similar, we feel that American Tourister has disappear brand when it comes to softshell and hardshell luggage. This is purely based on style, and the fact that both brands are very similar in quality.

If you have your own opinion concerning American Tourister and VIP, please don’t hesitate to leave your comment below. Would love to start a discussion about both of these awesome luggage companies!