This review of the CamelBak M.U.L.E. NV vs H.A.W.G. NV is to show the differences and similarities between these two mountain bike backpacks. Both of these backpacks were created with a slim profile so that you can easily move around as you are biking on rough terrain. They both hold a hydration reservoir with a volume capacity of 3 liters. This way, you can take a sip of water whenever you are on your bicycle without needing to use a canteen.

You may like to read: Nathan Trail Mix Hydration Belt Review 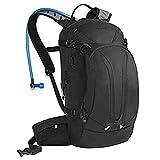 A feature of these backpacks is the magnetic clip that you can use to quickly hook up your hydration reservoir hose. There is no need to remove the backpack or even stop your bicycle in order to take a sip out of the hose. This magnetic clip is a cool feature as it is not that common in hydration packs.

Both of these backpacks have an integrated rain cover in case the weather starts to turn and you are caught without any protection. Simply remove the drain cover from its bottom pocket and place it back when you’re finished. 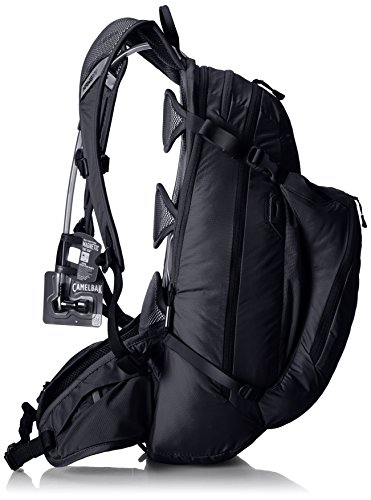 But what backpack would be complete without a spot to put in your cell phone and your keys. There is even a spot to put your lunch bag without it interfering with the rest of your content.

These backpacks have 3 interior slip pockets and five exterior pockets that have zippers. It is super easy to organize your items when you know that they will be separated inside separate pockets. For those larger items, there is a slip pocket on the outside.

Differences between the CamelBak M.U.L.E. NV vs H.A.W.G. NV

Now you may be wondering what the differences are between these two backpacks. In fact, they do look very similar and seem to have many of the same features. But both were created for slightly different purposes…

While both are designed to allow for greater ease of movement while on a mountain bike, the H.A.W.G. NV is bigger than the M.U.L.E. NV. Here are the specs for both backpacks:

As you can see, the H.A.W.G. NV allows for more content, as its volume capacity is 8 liters extra. Keep in mind that the water reservoir does measure the same and will hold the same amount of water.

The H.A.W.G. only costs around $15 more than the M.U.L.E. on Amazon. We feel that for most people, the H.A.W.G. is well worth the cost. Also, both come with a lifetime guarantee, so there is close to no risk in purchasing either of them.

So which of the two do you actually need? The M.U.L.E. is advertised by the manufacturer as being able to hold enough items for one full day’s worth of hiking or biking. We feel that this is true if you’re going to be backpacking ultralight.

But for general purposes, the M.U.L.E. is best suited for half days if you’re going to be doing a lot of activity. On the other hand, H.A.W.G. seems to be the best for an entire day backpacking. It is not exactly suitable for an entire weekend, even if trying to pack ultralight.

We feel that for most people, the H.A.W.G. is the better choice due to it being more versatile in terms of its size. The M.U.L.E. is rather small, and we would not recommend it if you’re going to be wanting to store your outerwear inside of its main compartment. It is not quite large enough to carry coats or jackets. You may be surprised at how small it is compared to the average backpack. The H.A.W.G. seems to be the more popular choice in this respect.