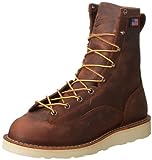 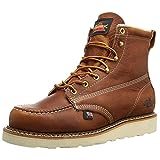 The Danner Bull Run and Thorogood boots look very similar to each other. Many potential customers would like to know if there are any significant differences between these work boots. We have created this Danner Bull Run vs Thorogood comparison so that you will have a better idea of how to choose between them.

Before we get right into the differences between the Bull Run and Thorogood boots, we would first like to go over a little bit of the history behind them.

A Bit Of History

You may already be aware that the Danner and Thorogood brands are located in the USA. Not only that, they are also many fractured in the USA, which ensures quality assembly. They have a sort of heritage look, as though they would’ve been taken out of your grandfather’s closet. In fact, they look very similar to what they would’ve looked like back when they were first being made.

Danner Boots is an American footwear company that is a subsidiary of LaCrosse Footwear. LaCrosse Footwear was founded in 1897. With the advent of the Danner brand in 1932, they started manufacturing in Portland, Oregon. Their boots are primarily made for people who work in construction and agriculture. They are also suitable for hunting in various outdoor activities. Their boots are very rugged and durable, and to made of only the highest quality fullgrain leather.

Thorogood boots had a humble beginning. In fact, they are testament to an American success story. At age 13, Albert Weinbrenner, son of a German cobbler, began his apprenticeship. He learned all about making footwear under his father.

In his early 20s, he began making boots for his friends who were involved in trade jobs in Milwaukee. Finally, at age 27, he started his own cobbler business in 1892. As is true of American success stories, his company was an immediate success. The success came when they introduced the ‘jabber’ boots. Since then, they have held many patents for the design of safe footwear, as well as manufacturing technologies.

There are many important similarities between these two brands. It should be noted that Bull Run is just one type of Danner boot. We will be comparing the Danner Bull Run to the Thorogood Heritage boots. The Heritage boots are one of Thorogood’s most popular models.

Here are the similarities below:

As you can see from the above, these two brands have much of what you would want to see in a work boot. But there are a few differences between them that may sway your decision as to which to get.

While they’re both extremely similar in design, it has been said that the Danner Bull Run is a bit stiff on the ankles when taken out of the box. However, after a few hours of wearing them, you may find that they have fit around the contours of your foot very well. In contrast, the Thorogood foods are already broken in right out-of-the-box.

Some customers have also said that the Danner Bull Run’s outer sole wears out faster than anticipated. We have found no reports of anyone saying that the Thorogood at her souls are wearing out too fast.

Generally speaking, the Thorogood seem to have better reviews than the Danner Bull on Amazon.

It is difficult to make a decision between these two boot brands because there are both so similar. Customers are generally very happy with both their Danner Bull Run and their Thorogood boots. But it seems like that the biggest difference between them is the fact that the Thorogood boots come already broken and out-of-the-box. In the end, the choice is up to you!

If you’ve enjoyed this Danner Bull Run vs Thorogood article, you might want to check out our review of Danner’s high quality work boots too!

1 thought on “Danner Bull Run vs Thorogood: The Showdown”