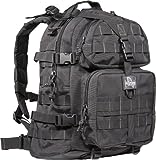 This review of the Maxpedition Falcon II vs Condor II was written because these are very similar backpacks that have subtle differences. These differences are not noticeable right off the bat. As you can see from the picture above, the Condor II is a bit shorter than the Falcon II, but they look very similar in design.

Before we go over the differences between these two backpacks, lets go over some of the similarities.

What makes the Falcon II and Condor II similar

Maxpedition has a reputation for making shorter bags of medium size that have plenty of space in their main compartment. They’re also very good at adding plenty of PALS webbing attachments so that you can use MOLLE or ALICE pouches and actually increase the total volume capacity. Both the Condor II and the Falcon II have these PALS attachments on the shoulder straps on the front of the backpack.

The durability of these backpacks is similar but with a slight difference that we will talk about later. But overall, these are some of the most durable backpacks on the market. They come with very thick materials and are triple coated for water resistance, plus an extra coating of Teflon for abrasion resistance.

They both hold water reservoirs that you can use to hydrate yourself without needing to reach for a water bottle every time you want to take a swig. Having these large water reservoirs come in very handy throughout the day, especially on a hot day.

They both have 4 large compartments; one is the main compartment, another sits in the middle, and the other two are at the top and bottom of the front of the backpack. Inside of the large compartments are some separators for your gear. There are zippered pockets where you can separate your smaller items.

You can fit a laptop into the main compartment, along with some textbooks and your clothing. If you fill up your backpack completely, it will get heavy but the extra padding on the shoulder straps makes it ultra comfortable.

The Falcon II and Condor II have compression straps at the top and bottom of the sides, and also in the front. This means that your gear is super compressible, especially if you’re going to only fill it half way.

Comparison of the Maxpedition Falcon II vs Condor II

Now, you may be wondering what the actual differences are between the Falcon and the Condor. By looking at the photo above and seeing that the Condor II is actually shorter, it may lead you to believe that it holds a lot less here than the Falcon II. This is actually not the case…

It is 2.5 inches taller, but it is also narrower. With a narrower profile, it eases your forearm movement. There will be less brushing up against the backpack while you are moving.

Both of these backpacks hold the same size reservoirs; up to 3 liters. However, the Falcon II accommodates for two 3 liter reservoirs instead of just one. If you will be bringing along another person with you on your hike, this could come in pretty handy.

If you tend to dehydrate pretty quickly, 6 liters of water could be good for you. But keep in mind that both are just medium sized backpacks. This means that you will not be hiking for several days at a time. Do you think you will need 2 water reservoirs? The answer is totally up to you.

Either way, both are triple-coated for resistance, plus an additional coating of Teflon for dirt build-up resistance. The extra thickness of the Falcon II is not technically necessary. Even the Condor II’s material is so thick that it will take months for you to break it in.

The Falcon II costs $20 more than the Condor II on Amazon:

When it comes to deciding between the Falcon II and the Condor II, the choice can be difficult. Both of the greatest features of these backpacks are included in both. Features such as durability, PALS attachments, and hydration reservoir slots come with both.

If we had to decide between the two, we would choose the Falcon II for the simple fact that it is slimmer and taller. This allows for better movement. In fact, some customers find it awkward to carry a pack as short as the Condor II.

Either way, we feel that both are good choices.