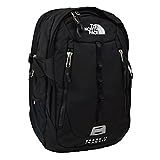 Many people are wondering what the difference is between the North Face Surge and the Surge II. In fact, both are about the same size and serve roughly the same purpose.

They are advertised as being ideal for wearing to school or work. They have special compartments for your laptop and other accessories that you can use for school. But there are slight differences that can easily be overlooked, as they are not widely advertised.

This is a review of the differences between the North Face Surge vs Surge II.

While both backpacks have a laptop compartment, the Surge II also has a compartment for a tablet. This is located in the main pocket along with the laptop section.

The Surge II has two pocket openings that are vertical in the front. Each of these openings leads to a separate pocket. This is great for organizing your smaller items.

Generally speaking, the original Surge has thicker materials than the Surge II. For example, the Surge II has a much thinner top handle than the regular Surge. It is not as wide or thick as the original, so it doesn’t have as much of a quality feel.

Un the Surge II, the side pocket is thinner than the side water bottle pocket for the original Surge. This does not mean that the Surge II is a low-quality backpack. The North Face backpacks are uniformly made of high-quality materials.

Other differences in design

One main difference between these two backpacks is that the Surge II has a daisy chain vertically along the front pocket. There, you can hang your helmet, trekking poles, or anything else that has a loop.

Both the Surge and the Surge II are about the same price on Amazon. To get current prices, please see the links below:

There is a clear difference between these two backpacks in terms of quality. The Surge II is made with thinner materials than the original Surge. But this is not a major difference and the material is still of high quality.

You may still be asking yourself which Surge backpack you should get, regardless of knowing some of the differences. In fact, the similarities in design make it difficult to choose. If you are a bicycler, it may be wise to choose the Surge II as it has daisy chain loops in the front where you can hang your helmet.

Another reason to choose the Surge II is the fact that it also has a tablet pocket. In fact, if you have a tablet for school or work, this can come in handy. Both backpacks come with front pockets that have plenty of internal organization. In addition to that, there is a spot for your calculator, pens and pencils, and a mesh pocket that you can shut with a zipper.

The North Face Surge vs Surge II: The Verdict

Of the two backpacks, the original Surge is the most popular. We are not exactly sure why this is, but we believe it is due to the success of the first release. Many people do not know about the Surge II, but that may be for various reasons.

One reason is the fact that it does not have a distinct advantage over the original Surge. Thus, it is simply a matter of having different design features that may accommodate different purposes. It does make sense that they are both about the same price. They are both the same size, and are both made to be used as daypacks.

If you have anything to add about the differences between these two backpacks, or if there are any features that you really like about either one, please leave your comment below.