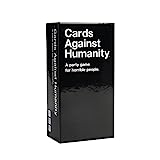 Now you may be wondering how these games are actually different, and whether one of them is better than the other. We will leave it up to you to decide based on the information below.

Cards Against Humanity vs Personally Incorrect

How To Play Cards Against Humanity

Game content: 100 black cards, 500 white cards, and a copy of the game guidelines (along with alternative guidelines)

At the beginning, a person is selected to be the ‘Card Czar’. Their duty is to pick a black card, which will consist of either a statement containing blanks, or a single question.

The other players have a collection of white cards in their hands. These cards are supposed to be the answers to the black cards.

Once the Czar reads off the black card’s content, every player tries to answer it as best they can using one of the white cards in their hands. The answer ought to be humorous or absurd. This will increase the probability of a win.

The Czar chooses the answer that he or she likes best. The black card is then handed over to the successful player. One point is added to the black card score for that player.

At the end of the game, players pick out three of their weight cards and try to construct a haiku. Rhyming does not matter as it is the ridiculousness of it that counts. The person with the most points wins the game.

How To Play Personally Incorrect

This game started off on Kickstarter and has become highly popular. The main difference between them is that it has added an “insert name” section to the cards.

Another major difference is such that it is considerably more offensive than Cards Against Humanity. This is done on purpose, and will surely produce much laughter. But it is not for the faint at heart. This game is racist, sexist, and ageist to name a few.

To begin, a player reads one of the question cards to the group. They replace the “insert name” portion with the name of one of the players.

All the other players tried to pick an offensive answer from their cards to give to the reader. The reader reads out the answers by filling in the blanks. This is the part that is supposed to produce the fun and laughter. Then, instead of the reader making the decision as to which person has the best answer, all of the players get a vote.

If you’d like to compare current prices between Cards Against Humanity and Personally Incorrect, please see below.

Cards Against Humanity vs Personally Incorrect: The Verdict

We at the OffTheGridGearHub.com personally like Personally Incorrect more than Cards Against Humanity. In fact, many people do. It produces more laughter because it is more offensive (in a healthy way). It also allows everyone to vote for each win instead of forcing the card reader to be the dictator of the win.