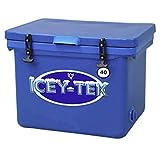 When you are going out on a hot day and want to keep your beverages and sandwiches cool, bringing along a cooler full of ice is a must. There are many coolers on the market to choose from, some purporting to be high end and thus being more expensive.

But without having any input as to how long the ice lasts in a cooler, how can a customer really tell whether the claims of the company are true?

We have done some research into what customers are saying about the differences between the Icey Tek and the Yeti.

Overall, there are three major differences between them as far as we can tell. We’re going to go over each of these differences in the sections below.

Which Is The Priciest?

If you know a bit about coolers already, you might’ve guessed that the Yeti is the costliest of the two. However, while some people used to say that the Yeti is twice as pricey, it seems like it has come down in price. On Amazon, similarly sized Icey Tek coolers are comparable in price to the Yeti.

Many people consider price an important factor when wanting to purchase one or the other. They feel that the Yeti is the higher-end model because it is so popular and has such a good reputation. Let’s compare the other features below.

Weight is a major consideration when it comes to coolers, as they naturally tend to be heavy. The Yeti is the heaviest of the two when comparing model that have roughly the same volume capacity. For some people, this does not make a difference. For example, if you’re just going to be going to a camping site and leaving the cooler there for days, the weight of the Yeti is not such a big hassle.

But if you need to take your cooler onto a boat, some customers feel that the Yeti would be too heavy for that. In response, they sometimes choose the Icey Tek for the convenience of being able to take it on and off the boat.

If you’re going to be doing a lot of moving around, perhaps the Icey Tek would have an advantage over the Yeti.

How Long They Hold Ice

While a small number of customers who owned both of these coolers feel like they both do a good job at holding ice, the majority of reviews state that they have trouble keeping ice in the Icey Tek on a hot summer day. Some say that it can only keep ice for about one or two days. This would not be enough for an extended stay on a camping trip.

Conversely, the Yeti can hold ice for 4-5 days according to customer reviews.

In order to make your ice last longer in either one of these coolers, make sure that you don’t put it into the cooler when it is hot. First, cool down your cooler with some ice. Then put in some more ice and shut the lid.

Another useful tip is to use dry ice. This will aid in ice retention. However, you must use safety precautions. For example, don’t leave much air inside of the cooler after having put in the ice, as the ice can expand and even explode!

Icey Tek vs Yeti: The Verdict

Which cooler customers end up purchasing is a matter of either utility or emotional preference. Some people like the Yeti due to its higher class status. When people see the logo of the Yeti on the side of the box, it makes them feel as though others will take notice and they will win brownie points.

But for most people, they just want the utility of a good cooler. If weight is an issue, the Yeti is perhaps not the best choice. But if you’re going to be going on a long trip that will last several days, the Yeti will hold ice for the duration of your trip.

If you’re only going to be about for a day or less, the Icey Tek will do the trick.