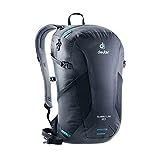 This comparison of the Deuter Speed Lite vs Osprey Daylite was written in order to inform customers about the major differences between these two daypacks. Perhaps the reason why there is so much interest with the two is that each are the most popular daypacks from the Osprey and Deuter lines.

While both are compact daypacks that are simple and minimalistic, they each have their own subtle differences. Those differences are what makes each of them optimal for different uses. But first, we will explore the similarities.

What makes the Osprey Daylite and Deuter Speed Lite similar

We love these two backpacks for the fact that they both have a slim profile. As a matter of fact, this is part of what makes a daypack awesome. But even in this department, they are not made completely equal. While they are both small and slim, the Deuter Speed Lite tapers at the bottom to give it an even slimmer profile where it really counts. This allows for better forearm movement while you’re riding your bicycle or running.

The Daylite and the Speed Lite have large front panel access to the main compartment. It is easy to get in there and view all of your gear at a glance. But they also have a front pocket where you can stash your smaller items.

These backpacks have a waist belt, which can easily transfer the load from the back panel to the waist. The difference between these two backpacks and others that are made to be larger is the fact that they do not have any side pockets on the waist belt. This is useful, as it reduces the weight of the backpack. Because of this, smaller items can go in your front pocket, only you will not be able to access these items without taking off the backpack.

As with most good hiking backpacks, both of them have a side mesh pocket where you can store your water bottle and snacks.

Comparison of the Osprey Daylite vs Deuter Speed Lite

Now you may be wondering what the subtle differences are between these two daypacks. We will outline all of the features that we feel are the most important differences so that you can make a purchasing decision.

First, we would like to point out that the Deuter Speed Lite actually has more features than the Osprey Daylite. This is, in part, due to the fact that it is a standalone backpack, while the Osprey Daylite is meant to piggyback off of larger Osprey backpacks. This is an important consideration to think of when you are trying to decide between the two. Although you can carry the Osprey Daylite by itself without needing to purchase another Osprey pack, the Daylite was specifically built to be compatible as a supplementary pack to other Osprey packs.

Now that we have that out of the way, lets go over the features that the Deuter Speed Lite has that the Daylite does not:

To compare prices between the Deuter Speed lite and the Osprey Daylite, please see below:

Between the Osprey Daylite and the Deuter Speed Lite, we like the Deuter Speed Lite for the fact that it is more fully-featured. This was not an oversight on the part of Osprey, it’s just that the Daylite was created as a simple day pack that you can piggyback off of larger Osprey backpacks. This is not to say that you need to own another Osprey backpack to take full advantage of the Daylite.

But if you want more features in a day pack, the Deuter Speed Lite has plenty of them. It is also for the more active outdoors adventurist. Its extra features are optimal for bicycles, runners, hikers, and mountain climbers alike. So if you’re trying to decide between the two, just remember that the cost of the Deuter Speed Lite is only $30 for many more features. But which of the two you should choose depends on the usage that you want to get out of it.